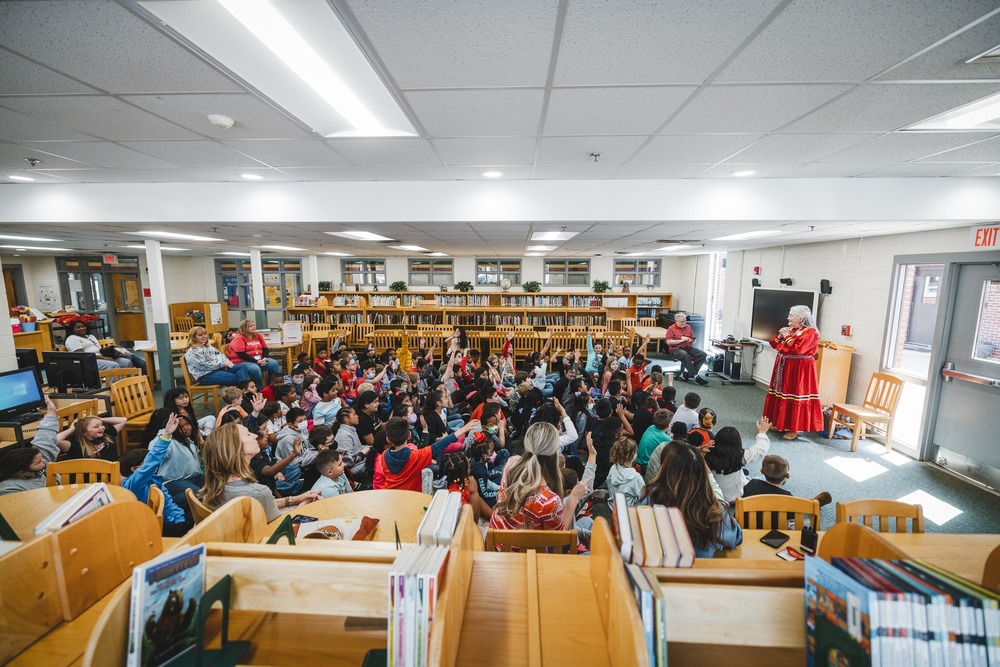 “West End strives to expose students to a wide variety of cultures and customs of people and groups from around the world,” Principal Dr. Dennis Drummond explained. “Since our third-grade social studies standards include lessons about early American Indian cultures, we were excited to offer our students an opportunity to hear some examples of Native American storytelling with the goal of bringing learning to life.”

As the students currently learn of Native American culture in the classroom, Brown’s stories offered them an intimate perspective into the culture, complete with animated gestures and varied voices.

"I think it's important for kids to sample the Native American culture from a different perspective than what they generally get in the classroom,” Brown affirmed.

Before sharing the stories, Brown gave the children the important disclaimer that they must believe that animals can speak to each other. She told the tale of The First Fire, which many animals braved to bring across the water to the other animals. After the attempts of many species, the tiny water spider was the one to complete the mission successfully.

She told the story of the origin of butterflies to bring about laughter and happiness to the children, as well as the story of an antlered serpent called Uktena.

The stories offer life lessons and often tell of how an animal came to be the way they are.

Brown shared a tune on her wooden flute and amazed the children with a demonstration using her blow gun made of river cane to shoot darts made from thistle downs into a target.

Brown, a retired educator from Rockdale County, taught eight-grade students for 34 years. With a strong focus on social studies and history, Brown developed a love for all-things-past.

Brown says that her storytelling is fueled by pure passion.
"I think it's what's in your heart,” she smiled. “And for me, it's always been in my heart."

“I love kids. And I'm a storyteller. I can't not tell stories,” she continued. “In 1979, I began to do the research that it took to look at the stories, learn the stories, and to take in anything I could to enhance them."

Brown affirms that when she sees the looks and reactions on the children's faces as she tells the stories, she knows that they will remember.

"As far as I'm concerned that's the greatest legacy I could leave," she said.

Her eyes lit up and a smile stretched across her face as she said that to her grandchildren she is known as Lisi, which is a shortened version of Elisi, the Cherokee word for grandmother.

Brown says that she visits schools anytime she's invited, and was elated to visit West End, her first time back inside the school to tell the stories to children since the pandemic.

“It is an event we look forward to each year!” Drummond added.